Historic Neighborhood Overlay Recognition Established for all of Paradise Palms 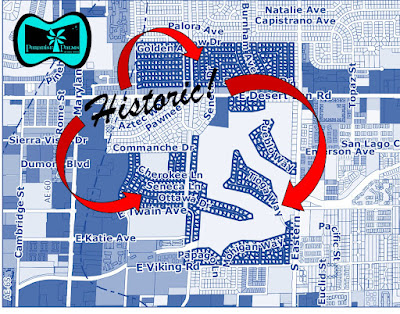 Dozens of neighbors attended the hearing to speak on the item, with both sides of support and opposition heard before the Board of County Commissioners. The Board listened to and heard all opinions on the matter, as community members gave their input on what the Historic Overlay meant to them.

After nearly an hour of comment, the Board closed the matter and turned the hearing over to Commissioner Segerblom, who praised the history and efforts of the community allowing the board to finally hear this matter. Commissioner Segerblom thanked all the speakers for coming out, and had the honor making a motion for approval. With a unanimous vote, the motion passed to a room filled with applause.

In 2017, a portion Paradise Palms became the first Historic Neighborhood Overlay within unincorporated Clark County, and five years later the neighborhood still holds that distinction, along with now becoming the largest in southern Nevada. Community grassroots efforts have been ongoing since 2015, and with the help of countless volunteers, supporters, and the efforts made by the Nevada Preservation Foundation, seven years of hard work has finally paid off.

Paradise Palms expresses its sincerest thank you to our neighbors, supporters, Commissioner Segerblom and his staff, and County Planning staff for all their hard work on the matter.