By MAGGIE LILLIS
VIEW STAFF WRITER
Posted: May 31, 2011 | 12:16 a.m.
The residents of Paradise Palms have taken forward steps together in the name of their community: a robust Neighborhood Watch, monthly cocktail mixers, a community clean up and measures to make the area a Clark County-recognized Pride Zone .
Residents of the 600 or so Mid-Century Modern homes huddled around Las Vegas National Golf Club, 1911 E. Desert Inn Road, have rekindled neighborhood unity that flickered away through the years, neighborhood activist Clay Heximer said.
In January, Heximer rallied neighbors to help obtain for the iconic development state protection and funding with the Nevada State Historic Preservation Office. County Commissioner Chris Giunchigliani suggested steps to draft a historic preservation ordinance to officially recognize notable neighborhoods.
Although neither push got Paradise Palms on the map, Heximer said it helped create a sense of unity that continues to benefit the neighborhood , the first planned community in Clark County.
Heximer created an online forum and distributes updates about news and events pertinent to residents.
"There just has been a lot of activity, and people have gotten involved since we started this," he said.
Some residents formed a Neighborhood Watch, and Heximer said the Metropolitan Police Department commented that the group purchased from it one of the largest amounts of Neighborhood Watch signs at once.
About 23 residents have the signs displayed on their property.
Neighbors alternate hosting monthly cocktail mixers, an opportunity for them to mingle and check out their uniquely designed homes. Renowned architects Dan Palmer and Bill Krisel designed the ranch and split level-style homes in the 1960s. Several celebrities have lived in the residences since.
Heximer said Paradise Palms has a reputation for unique homes, which draws a different kind of resident. He added that he has heard of new residents being drawn to the neighborhood because Paradise Palms' community efforts are also giving it a good name.
"I just met people who bought because they knew what we were doing," he said.
Giunchigliani joined neighbors in a clean up, part of their work to make Paradise Palms a Pride Zone.
Clark County developed the distinction, which includes a $1,000 grant that groups must apply for, to provide a formal way for communities to organize and interact with neighbors and the county.
Communities work with designated liaisons to determine if their projects to unite or beautify their areas are worthy of the grants.
They help facilitate code enforcement, graffiti abatement, waste clean up and more.
Residents do the grunt work, Heximer said, but the Pride Zone designation represents the county's recognition for their efforts.
Tamara Williams, community liaison for Clark County District E, said Pride Zones are ideal for communities such as Paradise Palms, which has no homeowner association.
"It's a coming together to be part of the solution," she said.
The county provided 10 Dumpsters and a hazard waste truck for residents to pitch large items and refuse such as old cans of paint. It also provided the rakes, gloves and trash bags for a recent clean up of the southern part of the community.
Dave Cornoyer has been a Paradise Palms resident for 10 years. He donned a Paradise Palms T-shirt while helping clear brush from an abandoned lot.
"It's something I always wanted to see happen," he said. "Back in the 1960s, this was the place to live. The amount of history is amazing. It's such an amazing neighborhood, such a safe place and it's great to see people who get it."
The clean up culminated in a community lunch .
A similar event for the north part of the community is in the works, Heximer said.
He said although Paradise Palms hasn't yet achieved historic status, he's pleased that it's become a more neighborly place to live.
"Something I decided I was going to do six months ago has turned into a big thing people are excited and involved in," he said. "It's nice seeing that it's going forward and working."
For more information about Paradise Palms, visit paradisepalmslas vegas.com. For more information on Pride Zones, call 455-0560.
Contact Centennial and Paradise View reporter Maggie Lillis at mlillis@viewnews.com or 477-3839.

Posted by Paradise Palms at 4:32 PM No comments: 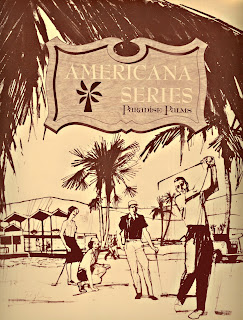 The Americana Series in Paradise Palms is located on the south side of Desert Inn, near Orr middle school. 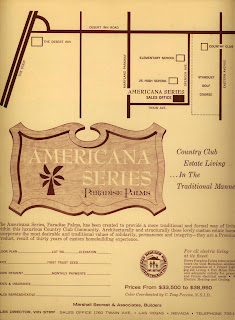 Posted by Paradise Palms at 2:53 PM No comments: