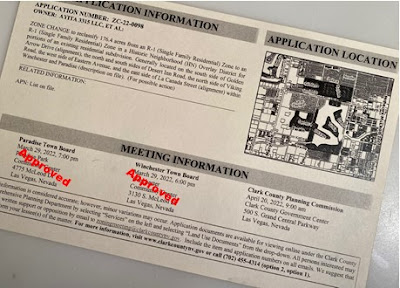 The Winchester and Paradise Town Advisory Boards recommended approval of the Paradise Palms Phase II Historic Overlay on Tuesday, March 29th, 2022. In February 2017, a 216-home portion of Paradise Palms became the first neighborhood in unincorporated Clark County to be designated as an Historic Neighborhood Overlay, roughly bounded by Desert Inn Road to the north, Commanche Drive to the south, Seneca Drive to the east and Oneida to the west. It has been the intention of the community to continue forward with a phased approach to the Historic Neighborhood Overlay designations to eventually expand to the entirety of Paradise Palms.

While Phase II outreach was completed at the end of 2019, our journey became delayed due to the pandemic. With Clark County stepping in and acting on our behalf, the remaining 747 homes in Paradise Palms are now eligible to be added into the existing overlay as Phase II of that designation, which will make Paradise Palms the largest historic neighborhood in Southern Nevada. With iconic architecture from Hugh Taylor, Dan Palmer, William Krisel and William Bray, Paradise Palms was the first master-planned community in Southern Nevada offering schools, parks, housing and shopping all in one community winning six merit awards from the National Association of Home Builders, plus special recognition from the American Institute of Architects in 1961. Developed by Las Vegas visionaries Irwin Molasky and Merv Adelson, Paradise Palms became home to entertainers, celebrities, community leaders, politicians, casino executives and thousands of Las Vegas families since our inception in 1960.

With a packed meeting room at the Winchester Community Center, the Nevada Preservation Foundation presented the item, and Town Board Member John Delibos made a very impassioned speech in support of the Historic Overlay after listening to residents speak on the matter, and had the honor of making the motion for approval. While attendance at the Paradise Town Board was lighter, members listened to residents who reside within the proposed overlay and from those whose properties were outside of the proposed overlay speak for and against historic designation. After careful consideration, Town Board Member John Wardlaw offered his thoughts on the designation and our community efforts, and just as he did in 2017, made a motion for approval.

Both the Winchester Town Board and Paradise Town Board recommendations will be considered by the Board of County Commissioners on April 20th, 2022, for approval. We’d like to thank all the Palmers for their support, participation, and patience as we reach the final stretch in completing our Historic Neighborhood.