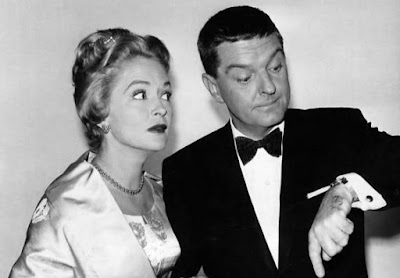 Peter Lind Hayes (06/25/1915-08/21/1998) and Mary Healy (08/14/1918-02/03/2015) were the original celebrity owners of 3538 Pueblo Way in Paradise Palms. The couple bought their Palmer & Krisel-designed Model 12A home, just one of five built in the neighborhood, brand new in 1963 and owned it until 2000 when Mary sold it two years after Peter’s passing. Healy and Hayes were staples of the Las Vegas strip, and divided their time between their home in Las Vegas’ Paradise Palms and New Rochelle, NY, before permanently calling Las Vegas home in the 1970s.

Hayes began his career in Vaudeville at the age of 6, appearing alongside his mother, entertainer and night club owner Grace Hayes. By age 16, Hayes appeared at New York’s Palace theater, and by 1939 worked his way into nightclubs, including his mother’s namesake lodge in Los Angeles. Hayes began to appear in films alongside Betty Grable, Lana Turner and Lucile Ball, before meeting and marrying Mary Healy in 1940.

Healy began her career in the 1930s, being crowned Ms. New Orleans in 1935, and after being signed by 20th Century Fox, appeared in 1938’s Josette before having major roles in Second Fiddle and Stardust. It was on a national tour following Second Fiddle that she met Hayes. After marrying, the duo performed nearly exclusively together during their 50-year career. 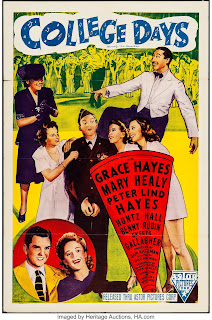 Their major film roles include Theodore (Dr. Seuss) Geisel’s musical fantasy The 5,000 Fingers of Dr. T and Zis Boom Bah, which also starred Hayes’ mother, Grace. In the 1950s, the couple had a major presence in television, on the CBS series Inside the USA with Chevrolet, where they were the original singers of “See the USA in your Chevrolet” before Dinah Shore’s well-known 1952 version. They were stars of CBS’ interview show The Stork Club, The Peter Lind Hayes Show and the variety show Star of the Family. 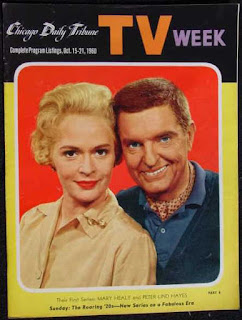 They starred in the early sixties semi-autobiographical comedy Peter Loves Mary, in which they played a show-biz couple who move to the suburb of New Rochelle to raise a family. In 1962 they were replacement guest hosts for The Tonight Show, after Jack Paar and before the slot was filled by Johnny Carson. They also hosted a breakfast radio program from their New Rochelle home, and made game show appearances on The Match Game, Password and What’s My Line.

Peter Lind Hayes’ mother, Grace, owned and operated the Grace Hayes Lodge, originally known as the Red Rooster, which stood near what is now the south entrance of the Mirage on Las Vegas Boulevard in the 1940s and 1950s (Grace Hayes lived in a ranch home, one of the last residences on Las Vegas Boulevard behind the lodge, well into the 1980s before Steve Wynn bought her home and relocated her to a penthouse at the Golden Nugget). Hayes and Healy were frequent visitors to Las Vegas, and in 1957 were signed to a $20,000 per week ($182,400 per week in 2020 dollars) engagement at the Sands. 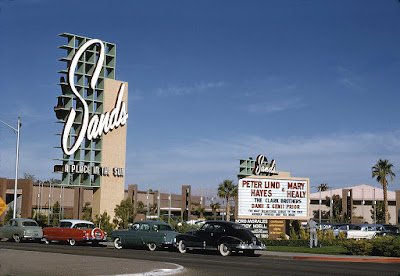 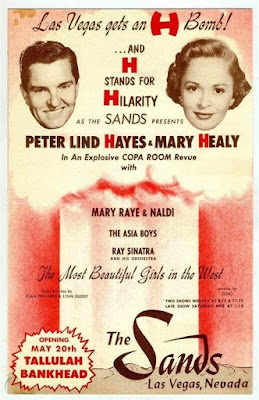 They went on to play the Sands 14 times over the years, as well as the Last Frontier and Flamingo. During the 1970s the couple became popular on Las Vegas’ social scene, maintain an active lifestyle during their semi-retirement. Peter Hayes never really retired, always jokingly referring to himself as an out of work actor. In 1979 the couple was honored at the Greater Las Vegas Chamber of Commerce’s Entertainment Personalities of the Year Awards, recognizing their 40 years in entertainment.

In 2006, Healy was honored at the Nevada Entertainer/Artist Hall of Fame ceremony at UNLV inducted  along with singer Wayne Newton, fellow Paradise Palmer Fred Apcar and architect John Klai II. Hayes and Healy were also writers, authoring 25 Minutes From Broadway and Moments to Remember With Peter and Mary -- Our Life in Show Business From Vaudeville to Video. Hayes also co-wrote the song Come to Me with Johnny Mathis in 1957.

Like many entertainers of the early years of television, much of the work of Hayes and Healy was ephemeral, with considerable amounts of their work on late night talk shows and other appearances lost to time. The couple was known for helping to propel and launch the career of numerous other entertainers, and was so well known in the mid-century they had a White House performance under their belt and were also the subjects of a Norman Rockwell painting. 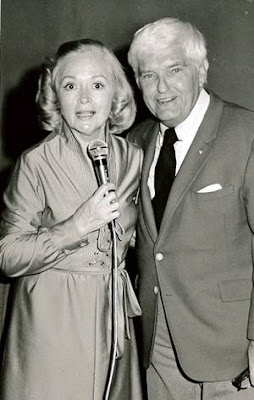 Hayes passed in 1998 at the age of 82 in Las Vegas, and two years later Healy sold their long-time Las Vegas Paradise Palms home to relocate to California, where she passed at 96 in 2015. Healy was a strong supporter of the Las Vegas community, donating generously to UNLV over the years, and was an active member of the Variety Club along with Hayes.

Posted by Paradise Palms at 8:24 PM